The Islamic resting place at Kleinbeucha, near Leipzig in East Germany recalls the officer Yusuf, who laid down his life for the liberation of Europe during the Napoleonic Wars.

On a hill in the country Borna near Leipzig there is a unique cultural monument of Islamic-Christian History; the grave of the officer "Yusuf, son of Mustafa" buried in 1813. 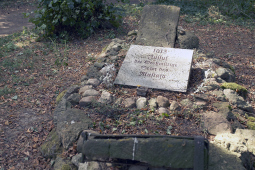 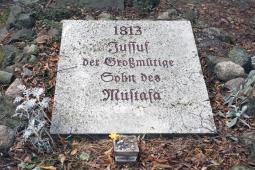 Yusuf was probably a Tatar from Poland-Lithuania but one thing is certain: Without the loving care of the tireless Saxon citizens of Kleinbeucha today the tomb would no longer store the evidence of the bitter decades of the Napoleonic Wars.

At that time thousands of Muslims and Buddhists, Volga and Crimean Tatars, Bashkir's and Kalmyk's from the Eurasian steppes, also fought as soldiers of the Russian, Prussian and Saxon armies on all opposing sides of the war.

Who was Yusuf, son of Mustafa?

Through the centuries, the grave and story of Yusuf, the Muslim officer from the east has entered regional history as Saxon mythology and a part of everyday culture.

In the regional history of local native researchers Yusuf is sometimes described as Bashkir, Russian, Turk or Tatar who came from the distant steppes of Mongolia or the southern expanse of Russia - the options are many. The inscription on the original grave stones read: "1813 roku Wachscheff - Yusuf, the son of Mustafa, the good-natured and brave" followed by "Nothing is good except God and Muhammad is the Prophet of God." The use of "roku" for the year specified on the original stone is an indication that Yusuf was a Lipka Tatar from Poland-Lithuania.

Tatar horsemen from Poland-Lithuania served in both the Napoleonic army and the armies of the Allies. Soldiers of the Lipka Tatars, under the command of Captain Sultan Ulan and Lieutenant Hassan Sultan Ulan-Aleb imam, took part in the battles near Leipzig and Dresden and then after the end of the war served in army of Alexander I. Polish Tatars served in the Saxon army from the time of the Polish-Saxon dual monarchy of Augustus The Strong in the seventeenth century and the Prussian army in 1800 even included several thousand Muslim Tatars.

To date, open questions still remain such as: